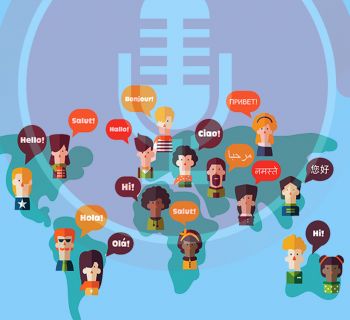 The Tower of Babylon in reverse

There must be times when speakers of one language wish they had another language to draw on. Even speakers of multi-languages often admit they are short “that one”.

Residents of Lichtenstein think little of bantering away in Swiss, Austrian, maybe a little Italian, French and broken English.

In Singapore, the citizens have evolved “Singlish” as a dialect of English. The vernacular fits snuggly in a society with many tongues

Singaporeans speak Mandarin with a Singapore lilt, along with dialects Hokkien, Cantonese, Hainanese, Teo Chew, Kate, Hakka as well as Tamil and don’t forget the nation’s Official language Malay. The National Anthem is sung in Malay.

Here in NZ, we get by with singing the one anthem in two languages. However in business, if you are going to make things happen on a global scale you need access to Multilingual Voice-over Services.

Any language any way

Any language anyway. Take confidence in Media Group’s expertise and advice in Multilingual Voice-over Services. Enjoy access to the very best translation services and voice over talent from New Zealand, Australia, the Asia Pacific, UK, Europe, and the USA.

At this stage, it’s a good idea to remind ourselves of the pitfalls of amateur translation services. Be wary. Especially when the girl from the back office says her uncle can do the translation because he’s from there and it’s cheaper.

Translations can be tricky. When the advertising agency was asked to translate the slogan “Coke adds life”, the reply came back as “Coca-Cola brings your ancestors back from the grave.”

If you have been holding off preparing marketing and advertising material for other countries, there are no more excuses.

Media Group NZ will make sure the translation is accurate and true to the original meaning. They’ll also recommend the ideal voice over talent for you project.

Whether it’s a one-off radio commercial or a full campaign. Or perhaps an eLearning program or Podcast. When you need audio translations and recording services it’s just a click away.

Everything these days happens faster on line. It’s the same with translations and voice overs. Check out the Media Group website. Click. Bang it’s done. To get a free quote underway head to www.mediagroup.co.nz