After Hours Voicemail Script For Business 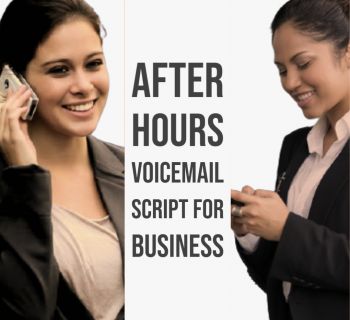 Close the door not the business

Just because the sun has set doesn’t mean you’ve closed the business. Life goes on and opportunities arise. However your After Hours Voicemail Script For Business might be chasing callers away.

It happens all the time with Voicemail greetings that sound like they were penned in the middle of a train crash and recorded by someone crawling from the wreckage.

Move away from the microphone

Over the years you’ve probably heard some pretty poor examples of what passes for an After Hours Voicemail Script For Business. Hopefully as you read this you are not recalling some of your own recorded disasters.

What starts as a straight forward task of writing the script becomes a minefield of fiddling doubt. In the morning you work on the wording. After a review perhaps you drop in an extra comma. Then later in the day you decide to take that comma out?    (apologies to Oscar Wilde).

Finally when you tire of fiddling with the phrases you take a big breath and hit record. That’s probably the last you think of it. Big mistake! Remember that message is  representation of you and your company.

You both deserve better. Especially in regard to your “business image”. It’s time to call on the audio expertise of Media Group NZ.

Step up a peg or two

The team at Media Group NZ will create your scripts with that inimitable je ne sais quoi. That certain creative flair that helps build on your unique personality and   differentiates you from competitors.

It’s so simple to have it done better. Tell Media Group NZ what you want to say and they will tell you how best to say it. When you have approved the wording for the script you’ll get to select the ideal voice to record your Voicemail greetings.

Online you’ll be able to listen to sample recordings from a wide range of professional male and female voice over artists. Make your choice and set the wheels in motion.

With everything happening online you’ll have your new Voicemail recordings delivered with minimum fuss and time saving ease.

Start here and give your image a boost with a professionally produced After Hours Voicemail Script For Business. www.mediagroup.co.nz