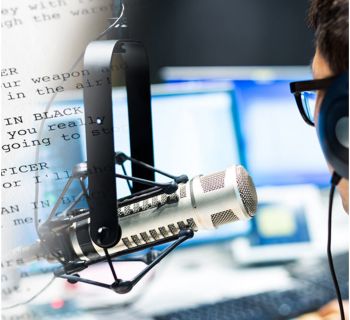 There are times you need to turn to a pro. You might be out on the golf range or battling with your drop-volley. The resident Golf of Tennis Pro is on hand to help.

You could be bowling well but struggling to pick up that 7-10 spare. Or weary of knotted sheets and “roman-candles” after a gybe-set at the windward mark.

Sports aside imagine a work situation. A “hot shop” promotions company. It’s all go, go, go. A brief arrives to script new spots for radio and TV. It might evolve into a major campaign

Normally this is a no-stress situation. But excreta occurs. What if there’s a case of writer’s block in the way? Not the Psychological type but a real stoppage because all the writers are fully occupied. That’s when it’s time to call on professional Script writing services for Radio and Television.

BEYOND THE CALL OF DUTY

Some might think about keeping the job “in house” and volunteer to “whip up a few scripts”. Or a colleague might fancy their chances as a creative writer. Stop now!

When sanity returns both will admit neither of them has what it takes to answer the brief. They might be able to bluff it sometimes but their talent as a scribe is more suited to penning the salutations on the company’s festive greeting cards.

The brief requires creating a whole new multi-media campaign from scratch. So the solution is to hire some real pros in Script writing services for Radio and Television.

At Media Group the most difficult writing briefs come under scrutiny from the company’s team of highly experienced scriptwriters. Additionally, no brief escapes examination by the Creative Director, who is also a Senior Copywriter.

The process is simple. With Media Group everything happens on-line. That means heaps of time saved getting through from the first draft to the final “client approved” script. And then into full production.

More than scriptwriting. Media Group is renowned for its expertise in all forms of audio for business. From Telephone On Hold Programs to Radio commercials as well as soundtracks for Television and U-Tube Videos.

You’ll be amazed at how they can assist. Go to www.mediagroup.co.nz